Growers in north central Montana (‘Golden Triangle’) have questions about risk management of cropping intensity and nitrogen (N) fertilizer strategies. A 10-yr study at Bozeman demonstrated economic resilience provided by variably-managed pea in rotation with wheat under contrasting available N fertility and uncertain wheat protein discount/premium schedules (Miller et al. 2015). A follow-on study was initiated in north central Montana to investigate whether this long-term response is also observed in a drier climates. Our objectives were to compare winter wheat yield and quality, agronomic efficiency of fertilizer use, and economic trade-offs in four alternative crop rotations managed with four different N fertility regimes. This study is planned to run for a minimum of six years at both sites. Here we report on the results for the first two years at both sites.

This plot-scale study began on farms in 2011 at Dutton (heavy clay) and 2012 at Big Sandy (sandy loam). Aragorn green pea was grown as the pulse grain crop at Dutton and a medium green lentil was grown at Big Sandy. This study includes four no-till cropping treatments in rotation with winter wheat, ranging from low to high agronomic risk: 1) Chem fallow, 2) Pea manure, 3) Pea or lentil harvested for grain, and 4) Spring wheat. All rotations were managed with four target N availability levels ranging from no fertilizer applied to 150% of recommended (3 lb available N per bushel of yield potential).

Soil nitrate N was measured 3 feet deep prior to wheat planting and additional legume credits were presumed for lentil or pea harvested for seed (9 to 13 lb N/acre) and for pea manure (18 to 26 lb N/acre). Target wheat yields were set to reflect a high potential yield; target yields after fallow and pea manure rotation were set equal while target yield in the continuous wheat was reduced by 33%. The yield goal for the pulse–wheat rotation was set 10% greater than continuous wheat (thus requiring greater available N, but it translated into greater N fertilizer rates in only 25% of the cases). 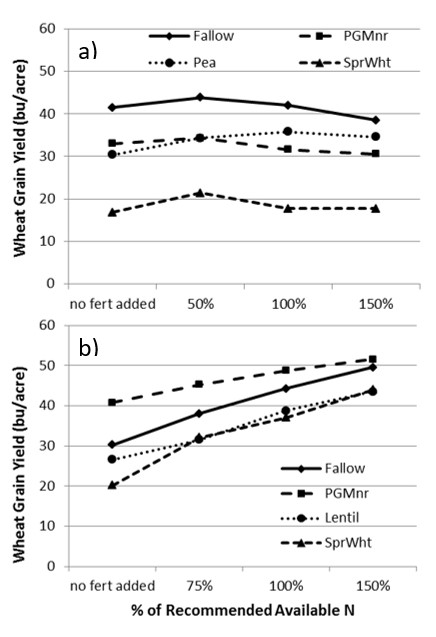 The base price for pea or lentil was set at a 24-month average for publicly offered prices in Montana centered on harvest. The base price for wheat was set at a 36-month average with harvest at the 12-month point. Protein discount/premium schedules were applied in two ways based on data collected from 40 Montana grain elevators from 2001-2012. During those 12 years, relatively steep discount schedules occurred in five years and flat market schedules in seven years. Equations were generated to reflect the average of the ‘steep’ and ‘flat’ years in calculating net returns to land and management. For this report those net returns were averaged across ‘steep’ and ‘flat’ protein discount schedules.

These results reflect only the first 2-year cycle of a study that is intended to run for 6-years to measure medium term crop rotation soil N and economic response. Wheat yield differed between sites with the fallow rotation producing the greatest yields on the heavy clay soil at Dutton (Figure 1a), while, surprisingly, the pea manure treatment produced the greatest yield on coarser soil at Big Sandy (Figure 1b). 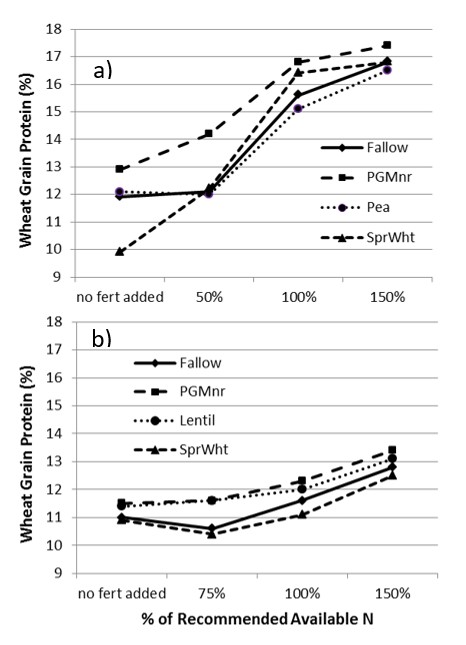 This study was funded by the Montana Fertilizer Advisory Committee and the Montana Agricultural Experiment Station.