Figure 1. Nitrogen in urea applied to the soil surface (left) is susceptible to volatilization after the granules dissolve and the pH of soil around the granule rises.

Historically urea fertilizer has been surface applied in Montana dryland winter wheat production systems. Often the fertilizer is applied during cold weather months beginning in the late-fall and extending to the early spring. Fertilizing fields separately from seeding is done primarily to expedite seeding operations.

Although urea is an excellent source of N fertilizer, it can be lost to the atmosphere as a result of ammonia (NH3) volatilization. The process occurs after urea granules applied to the soil surface dissolve and are converted to ammonium (NH4+) in a process called “hydrolysis”. At the same time, the pH in the soil microenvironment around the granules rises. The rise in pH makes the NH4+ unstable and a portion can be lost to the atmosphere as NH3 gas (Figure 1). For wheat growers, NH3 volatilization represents economic loss of fertilizer N, which can potentially affect yield and grain protein. 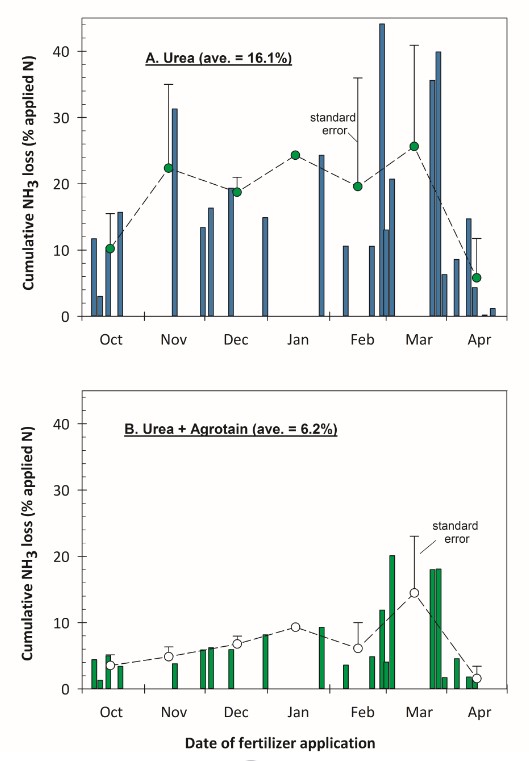 Figure 2. Cumulative NH3 lost from urea (A) and urea+Agrotain® (B) broadcast on the soil surface at different sampling dates. Vertical bars indicate results from 23 trials conducted over 7 seasons (2008-2014).
Green and white circles are mean of individual trials conducted during the specified month.

In 2008, we began a study to quantify NH3 loss from surface-applications of urea and to determine whether applications during cold weather months were susceptible to volatility. This fact sheet provides a summary of the results from 23 trials conducted over 7 years on private farms in Hill, Fergus and Gallatin Counties. Ammonia losses were quantified using a micrometeorological massbalance approach (http://landresources.montana.edu/ureavolatilization/) with circular plots (0.3 acre), a center mast, and samplers that provided for continuous measurement of NH3 loss. Ammonia samplers were exchanged approximately once per week over trials lasting up to 12 weeks. This fact sheet is an update of the earlier fact sheet Number 59.

Cumulative NH3 loss, expressed as a percentage of the applied N rate (90 lb N/acre), averaged 16.1% for 23 trials conducted between 2008 and 2014 (Figure 2A). Surface moisture conditions at the time of fertilization and precipitation amounts and distribution following fertilization had a large impact on NH3 loss.

A commonality of the five trials where NH3 loss was greater than 20% of applied N was that fertilizer applications were made to soil high in water content, or covered with a modest depth of snow. Precipitation events that followed were light (≤0.2”) and scattered at least through the first 30 days after fertilization. Under this scenario, urea granules dissolve and hydrolysis occurs quite quickly resulting in very high NH3 loss during the first week following fertilization. One example is provided by a trial west of Havre, MT. Urea was applied to a very moist soil surface with a light dusting of snow (Figure 3A). Within 30 minutes following fertilization, the urea granules started to dissolve (Figure 3B). NH3 loss was equivalent to 22.4% of applied N over the first week following fertilization as the soil dried (Figure 3C).

A second example is provided by a trial near Denton, MT. Urea was applied onto a modest snow pack (0.35” water equivalent; Figure 4A). Cumulative NH3 losses were 20.7% of the application rate (90 lb N/acre) over an 8-week period. Losses were particularly large during the second week (6-13 days post fertilization) when the snowpack disappeared and the soil surface dried (Figure 4B and C).

If growers cannot incorporate broadcast urea by tillage or irrigation, they should ideally wait until soil surface is sufficiently dry such that urea granules will not dissolve at the surface until the first precipitation event (Figure 5). If precipitation events (either rain or snow) that follow are light and scattered (e.g., <0.2” per event) then NH3 losses will typically be in the range of 10 to 20% of applied N. If a large precipitation event (>0.7”) follows the application of urea, in particular if they occur within a few days after urea is applied to a dry soil surface, then volatilization loss will likely be <10% of the application rate.

FIGURE 4. Urea applied onto snow March 2, 2011 (A), and snowpack disappearing 6 days later (B). NH3 loss summary over 8 week trial (C). Note the greatest NH3 loss occurred during the 2nd week (6-13 days post-application) when the snow pack disappeared and the soil cycled from wet to dry.

In Montana, large precipitation events typically occur in the spring. Our 7 year study found that NH3 loss from urea was lower for April applications, than application made Nov to March (Figure 2A). This response was largely due to the occurrence of large precipitation events following fertilization. Conversely, urea applications in Nov, Dec, Jan, Feb, and March all resulted in NH3 losses that exceeded 10%. Urea applied to soils in the late-fall to winter will typically stay near the surface because the soils are frozen and precipitation which does occur (as snow or rain) does not easily infiltrate into the soil.

Another way to mitigate NH3 loss from surface applied urea is to treat urea with the products such as Agrotain® that contain the urease inhibitor, N-(n-butyl) thiophosphoric triamide (NBPT). Urease inhibitors slow the rate of urea hydrolysis. The N in the urea is converted to ammonium (NH4+), but at slower rate. As a consequence, the soil microenvironment around the urea granule does not experience a large rise in pH, and NH4+ produced is not as readily converted to NH3 gas. Our 7 year, 23 trial study also examined the impact of treating urea with Agrotain®. Adding Agrotain® typically reduced cumulative NH3 loss by 60-65% relative to untreated urea (Figure 2B). 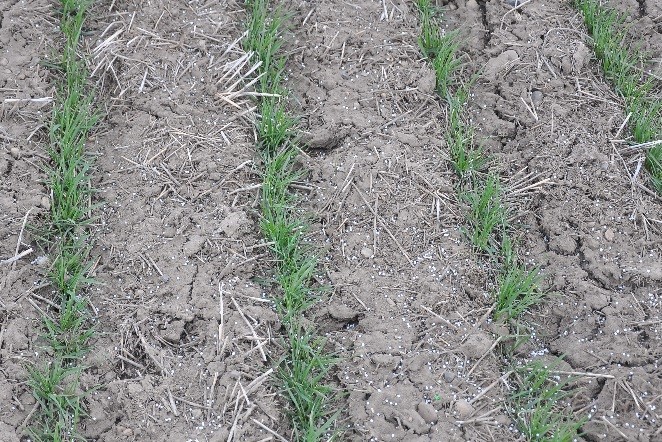