Urea is currently the most common fertilizer N source used by Montana growers, comprising approximately 80% of total N consumption. In winter wheat systems, urea is often broadcast to the soils during the late fall, winter, or early spring following crop emergence. The practice of fertilizing fields in a separate operation is done primarily to expedite seeding operations. Although an excellent N fertilizer source, the N in urea is susceptible to volatility as ammonia (NH3) gas which can ultimately affect the fraction or portion of N recovered by the crop, and hence productivity. Previous trials in Montana have shown that N volatility will vary greatly with application timing. Nitrogen loss as NH3 can be quite large (>20% of applied N rate) following urea applications in the late-fall and winter (i.e., Nov to March). These losses can be decreased by 60-65% with the addition of Agrotain® (active ingredient N-(n-butyl) thiophosphoric triamide, NBPT). Similarly, NH3 loss can be mitigated by applying urea to dry soil surfaces in advance of large precipitation events that are more likely to occur in early spring than late fall or winter (Montana Fertilizer eFacts. No. 70, June 2015).

The goal of fertilizer management strategies should be to minimize N loss (to atmosphere and ground water) and to provide for the highest recovery of applied N by the crop. Given the importance of application timing and Agrotain® on NH3 loss from urea, this study was conducted to determine the impact of these two parameters on fertilizer N recovery, and grain yield and protein of winter wheat. Urea applications were made during three periods (late-fall, winter, early spring) to simulate production practices in Montana, and fertilizer N recovery was defined as the percentage of applied N recovered in wheat grain at harvest.

Experiments were conducted over three seasons (2011-2012, 2012-2013, and 2013-2014) on dryland farms in Fergus County, Montana. All fields were under no-till wheat-fallow management. Experiments were conducted in fields expected to be responsive to N fertilizer. Soil analysis revealed only 17, 39, and 23 lb N/acre in the soil (0-24” depth) based on samples collected in September of each respective season. Surface-applied urea and urea+Agrotain Ultra® (3.4 quart/ton urea) at 90 lb N/acre were applied at three timings to determine volatilization losses (Table 1) using a micrometeorological approach (http://landresources.montana.edu/ureavolatilization/). Fertilizer N recovery was determined by utilizing 15N-enriched fertilizer (at 45 and 90 lb N/acre) in microplots. 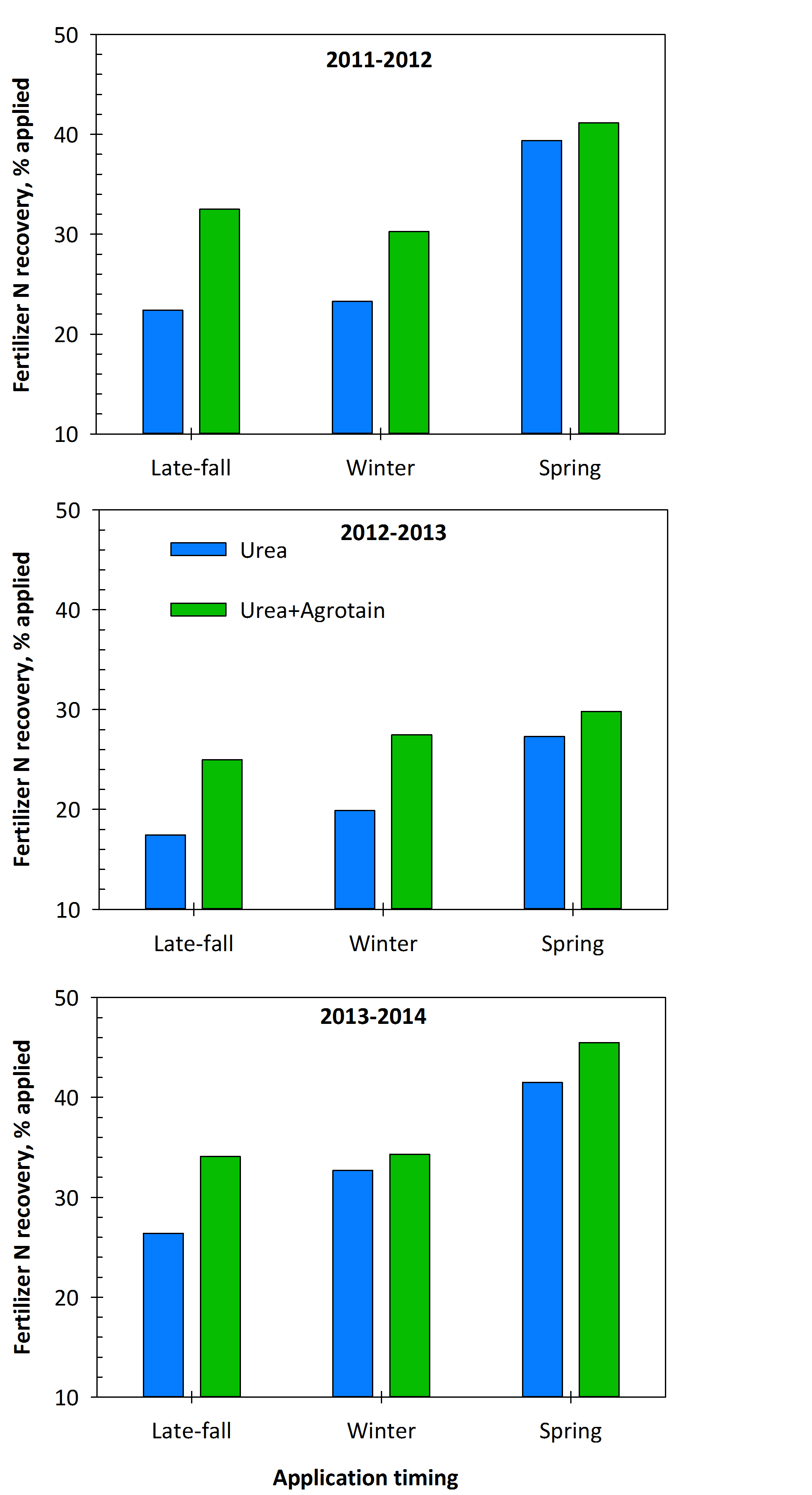 Figure . Fertilizer N recovery in the grain of winter wheat (c.v. Falcon) as affected by timing of applications and addition of Agrotain®. Mean of two N rates (45 and 90 lb N/acre).

Urea application timing and Agrotain® both affected fertilizer N recovery in grain (Figure 1). Spring urea applications resulted in greater recovery of N fertilizer (average = 37.4%) than late-fall (26.3%) and winter (28.0%) applications. This response was likely because N applied in April was more closely synchronized with crop demand for N. In addition, N loss from NH3 volatilization was lower from spring applications than late-fall and winter applications (Table 1). Ammonia loss was lower in the spring because large precipitation events followed the application of urea, allowing for urea to infiltrate into the soil where it was protected from volatilization.