This study looks at the long-term effects of pea in rotation with wheat on soil carbon, nitrogen (N), and profitability. Although continuous pea-wheat systems are not recommended in Montana due to disease concerns, pea disease was not noted during the 14 years of this study. This fact sheet reports net profitability of wheat-only and wheat-pea cropping systems, as affected by high or low N availability. In the study’s 7th to 10th year (2009-12), a) pea-wheat was the most profitable system, b) pea-wheat systems had greater economic resilience than wheat-only systems under uncertain N fertility needs (because of uncertain precipitation) and wheat protein discount schedules, and c) managing N fertility at full recommended rates was most profitable for wheat-only systems (Miller et al. 2015). Here we look at 2013-16, to see if the findings are similar to the first 4 years, but lacking the 2010-11 wet period.

Engel et al. (2017) presents soil carbon response through the first 10 years of this study. We will write fact sheets on the effects of cropping systems and N levels on soil carbon and N contents once those data have been processed.

We report profitability of 7 cropping systems in a single-phase design from 2013 to 2016 (Table 1). The CRP-PgW system was a 10-year old perennial alfalfa/grass mixture converted to a pea-wheat rotation in 2013. All systems were managed as no-till except for the tilled fallow system. Pea hay was harvested and cover crops terminated on the same day, usually in mid-bloom, but earlier if weeds were problematic.

All variable inputs were accounted for, including fertilizer, farm machinery use, seed, and herbicides. Net returns to land and management are reported here. All crop insurance and other farm program aspects were ignored. Base wheat prices were the average of a 36-month marketing period centered on the harvest month (except 2016). Pea prices were also 36-month averages based on USDA ERS data for spring pea, and local quotes for Austrian winter pea. Pea hay was sold ‘on the stump’ and valued at $45/ton based on a 4-inch swathing height.

Systems were split into high and low N fertility strategies based on available N (soil + fertilizer N). The high N rate was 3 lb of available N per bushel of targeted yield, and the low N rate was half of that. Target yields were 60 bu/acre for spring wheat and 90 bu/acre for winter wheat. Soil nitrate-N was measured to a 3-foot depth prior to seeding wheat crops. An overwinter N credit of 22 lb/acre was assumed for fall soil nitrate-N measurements. Additional N credits for pea either harvested as seed, harvested as hay, or sprayed out as a cover crop, were 27, 40, and 54 lb N/acre, respectively based on observations from 2009-12 pea N contributions. A 6-foot no-till disk seeder with disk coulters for fertilizer placement was used, with 10.3-inch row spacing in odd-numbered years, and 12-inch row spacing in even numbered years. Urea N fertilizer was mid-row banded at time of seeding. All crops received 5 lb N/acre, 23 lb P2O5/acre, 22 lb K2O/acre, and 8 lb S/acre in the seed row except in the pea cover when no starter fertilizer was used. Herbicides were applied as needed.

Average precipitation during 2013-16 at the MSU Post Farm was 2.2 inches less than normal, ranging from 5 inches below in 2013 to 0.5 inch below in 2014. Thus, these results reflect a climate pattern when 14 inches is the average annual precipitation, near the average of many Montana cropping regions.

We assessed 4 economic scenarios, high vs. low N rates each with steep vs. flat discounts (Figure 1). The pea-wheat (PgW) system had the greatest net returns, totaling over $200/acre more for the 4-year period than the next highest return. Across the 4 economic scenarios, the greatest variation occurred for the tilled fallow (TF) system, and least for the converted CRP (CRP-PgW) system. Following 10 years of a perennial alfalfa-grass mixture, seed yields of pea and wheat were consistently lower than the PgW system, including a 35% lower yield in winter wheat 4 years after the conversion. However, the N supply from that perennial legume dominated system consistently produced higher wheat grain protein than in the PgW system (e.g., 3.0 %-units greater in 2016), partially offsetting decreased return from reduced yield.

In every year, despite some with much drier than normal conditions, the high rate of N fertility increased net returns, and summed $574/acre over 4 years when averaged across all 7 cropping systems, compared with $273/acre for the low rate of N fertility. However, the difference between full and ½ N rates was much greater when protein discounts were steep, rather than flat. At full N, discounts had little influence on net return in any system with pea or fallow, but strongly influenced net return in continuous wheat. The 2009-12 years had similar returns between ½ N and full N in systems containing pea, possibly because the 2010 wheat year was much wetter than 2014 or 2016 favoring pea residue N release (Miller et al. 2015). 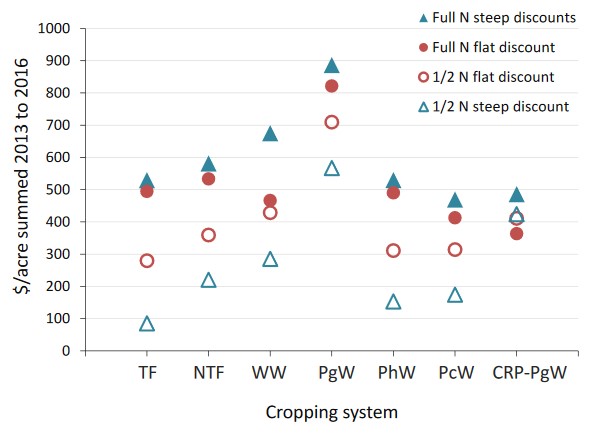 Operations for this study were funded by the Montana Fertilizer Advisory Committee, while senior personnel were supported by the USDA-NIFA Ag Experiment Station Project MONB00351 under 185726 and other accession numbers.