Alfalfa is a major perennial forage crop which is known for its high dry matter yield and hay quality. Boron (B) is an essential micronutrient, and its deficiency limits alfalfa production (Kelling 1999). Alfalfa has a high requirement for B (Pecinovsky and Lang 2012) and is susceptible to B deficiency (Dear and Weir 2004), with B as a requirement for cell wall integrity and growth. Usually, B deficiency symptoms in alfalfa become visible in dry conditions or towards the final
harvest of the season.

In Montana, the area west of the continental divide is considered to be the highest-producing alfalfa region in the state. High annual forage production incurs large nutrient removal from the soil. The estimated B removal ranges from 0.02 to 0.08 lb per ton of alfalfa hay produced (Jacobsen et al. 2005; Kelling 2000). Available B levels in soil are usually low, with less than 1.0 part per million (ppm) considered to be deficient. Therefore in areas where alfalfa production is high, maintenance fertilization may be needed for sustained yield and quality. This study looked at various timing and levels of B applications for alfalfa in highly-productive regions in MT.

The study was conducted in 2015-2016 at two locations: 1) Northwestern Ag Research Center, Creston, MT, on a fine sandy loam soil, and 2) a producer’s field in Dillon, MT, on a loam soil. The study was laid out in a randomized complete block design with four replicates. Five B treatments were applied including an untreated check (Table 1).

A foliar application of a 10% liquid B solution was applied using a CO2-pressurized backpack sprayer. The same B treatments were applied to the same fields, so 2016 results reflect a potential carryover of B applied in 2015. Other nutrient requirements for the alfalfa were determined via soil core analysis and fertilized appropriately. Initial soil test analysis from 2015 showed that NPK content at Creston was 22.5 lb/acre, 28 ppm, and 275 ppm, respectively. At Dillon, NPK was 9 lb/acre, 11 ppm, and 130 ppm, respectively. 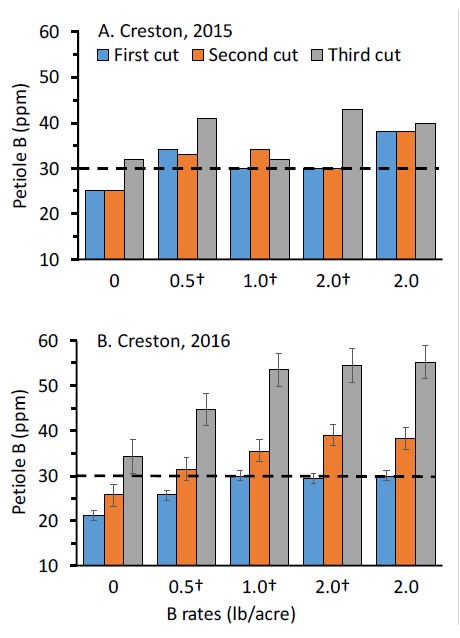 FIGURE 1. Top 6-inch petiole boron (B) content at 10% bloom in Creston. † indicates split B application. Dashed line marks sufficient tissue B. Lacking error bars in Figure 1A is due to the composited samples per treatment.

The 2015 initial soil B at the Creston and Dillon sites were 0.2 and 0.8 ppm, respectively, which are considered very low and low. For loam and sandy loam soil, 0.9 to 1.5 ppm B is considered to be sufficient (Kelling, 1999). The pH of Creston and Dillon ranged from 6.5 – 6.8 and 8.0 – 8.2, respectively. The two contrasting soils were used to evaluate the response of alfalfa yield and quality with B fertilization when B fertilizer is strongly recommended (Creston) vs. when B fertilizer is not strongly recommended (Dillon).

At Creston, alfalfa yield for 2015 and 2016 averaged 5.4 tons/acre per year. Boron did not influence the yield of alfalfa at Creston (data not shown), even though initial soil test levels indicated B deficiency. In 2015, the petiole B content was always at sufficiency level except for the check treatment at first and second cutting (30 ppm, Kelling, 1999; Figure 1A). In 2016, petiole B content increased significantly (Figure 1B) in all cuttings with B fertilization.

At Dillon, where initial soil B was slightly below sufficiency levels, the combined first and second harvest yields were 3.6 and 4.4 tons/acre in 2015 and 2016, respectively. Only the second cutting in 2015 showed a yield response to B (Figure 2, P=0.05). Boron tissue content (43-60 ppm) in all treatments, including the check, was well above sufficient levels for both years. Only in the second cutting of 2016 did B treatments significantly increase tissue B concentrations (P=0.02, data not shown).

The two-year analysis showed that B fertilization did not substantially influence yields on either of the sites. Therefore, in this study, soil test 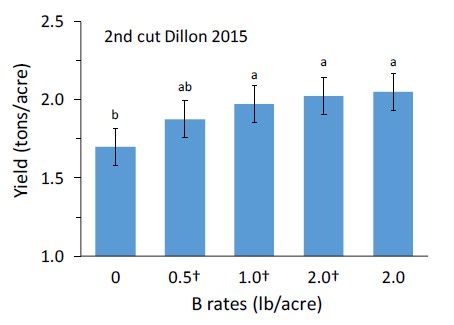 FIGURE 2. Second cutting yield in Dillon, 2015. Bars with at least one letter in common had equivalent yields. †  indicates split B application.

levels did not appear to be a good indicator of potential yield response to B fertilization. In contrast, petiole B content did increase with fertilization on the site with very low soil B, and did not respond to fertilization on the site with close to sufficient B soil levels. This agrees with Goldberg et al. (2002) who found no correlation between soil test B levels and petiole B content. Thus, to confirm if B is needed in alfalfa, petiole B analysis might be more diagnostic than soil B analysis.

Since there is a significant increase in plant tissue B content, it implies that foliar applied B was taken up by alfalfa; however, it did not increase quality. Alfalfa quality was not affected by B fertilization at either site during the study. Regardless of B rates, crude protein and total digestible nutrient content of alfalfa was >20% and >55% respectively for all cuttings in both locations and both years. These values are an indicator of premium quality hay.

We thank the Montana Agricultural Experiment Station and Montana Fertilizer Advisory Committee for their generous support on this project. We also thank Carter Butori for providing us a research space at his farm.