Soil acidification is a recent development in Montana that has occurred because of long-term use of ammonium-based nitrogen (N) fertilizers. Acidification has led to cases of aluminum (Al) toxicity of field crops where the surface soil pH has fallen below 5.0. Remediation of acid-affected soils will ultimately require the application of liming materials. However, aglime can be quite expensive, exceeding $100 per acre. Short-term solutions to manage these soils are important where farm budgets are tight and under scenarios where farmland is being leased on a short-term basis. Previous work from Oklahoma (Johnson et al. 1991; Kaitibie et al. 2002) found that seed-placed phosphorus (P) can prevent winter wheat yield losses from aluminum toxicity on acid-affected soils. We conducted this study to determine if high rates of seed-placed fertilizer-P could mitigate Al toxicity and increase yield of cereal grains similar to aglime in an acid-affected Montana soil.

Both fields had a prior history of yield losses from soil acidity and Al toxicity. The soils tested very high in available P at 50 and 83 ppm in the top 4” according to the NaHCO3 (i.e., Olsen-P) test, in 2018 and 2019, respectively.

Our study included five fertilizer-P rates of 0, 15, 30, 60, and 90 lb P2O5/ac in combination with two aglime rates (-lime and +lime, or 0 and 5 ton/ac). The ten treatments were replicated three times in a split-block design. Individual plots were 5’ x 20’. Fertilizer-P was applied in the seed-row as 0-45-0. An agricultural dolomitic limestone product (99.2% passing through a #100 sieve) from Montana Limestone Company (Warren, MT) was applied to the limed treatments October 30, 2017, using a Stoltzfus (Morgantown, PA) wet-lime applicator. The aglime material was incorporated by chisel plowing (15” sweeps) two times to a 6” depth on the first pass and to 8” depth and at right angles on the second pass. This tillage was also applied to the plots that did not receive lime. The application of aglime was deemed effective at remediating acidity as soil pH (0-4” depth) was 6.1 and 6.8 during the spring of 2018 and 2019 in the lime treated areas.

We observed large differences in shoot growth as a result of the aglime application and fertilizer-P in 2018 (Figure 1). 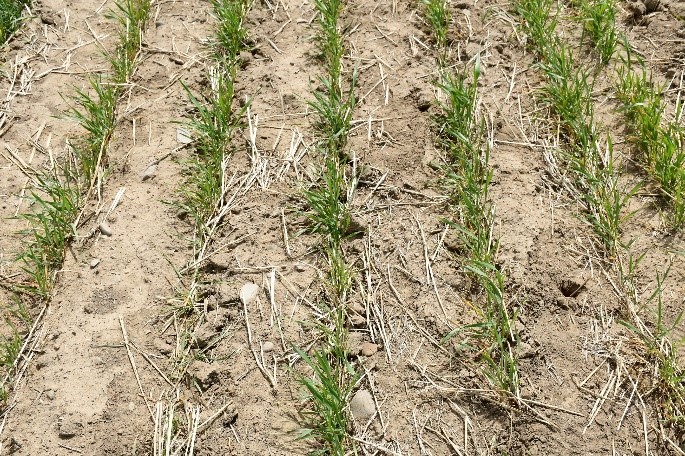 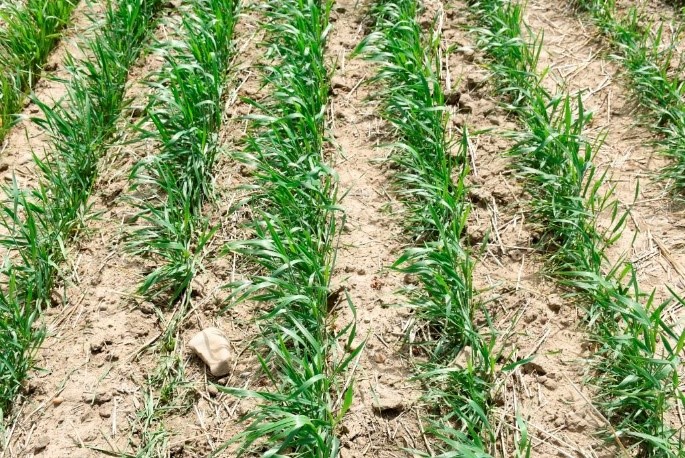 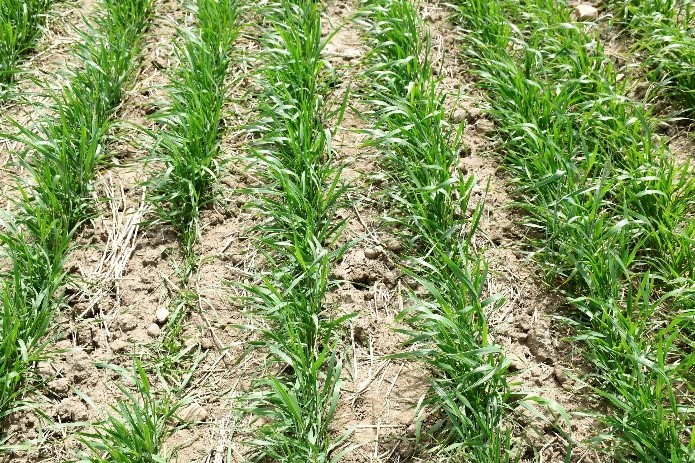 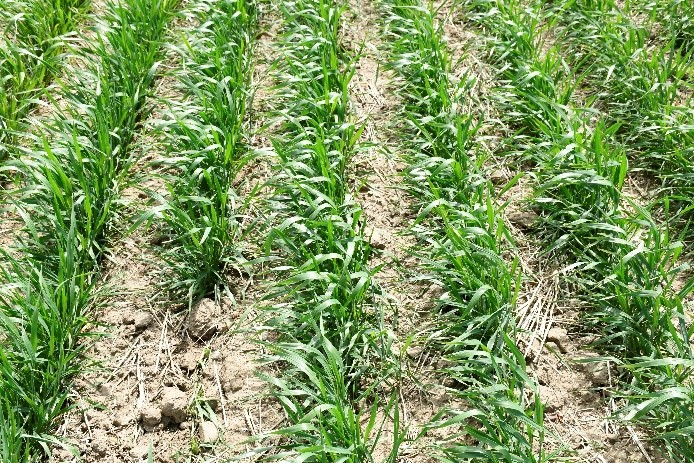 Figure 1. Durum growth differences at early tiller were very evident as a result of liming and fertilizer-P (90 lb P2O5/ac) during the 2018 growing season. Soil pH = 4.2 without aglime and pH 6.1 with aglime. Soil pH did not change notably with fertilizer P. 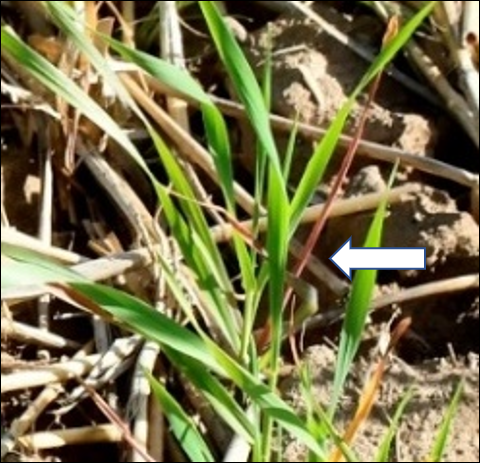 We analyzed plant tissue samples for P at the early tiller stage to determine the impact of lime and fertilizer-P on plant nutrition (Figure 3). Plants in the plot without lime or fertilizer-P had very low plant P concentrations (0.17%), consistent with our visual observations of P deficiency. Plant tissue P was i) improved with seed-placed fertilizer-P; and, ii) greater with lime than without lime at similar fertilizer-P levels.

Overall, our results indicate that under very acidic soil conditions Al toxicity and P deficiency may both cause reduced crop growth and grain yield. The possibility of yield losses from P deficiency will likely not be forecast from a soil test report. As noted above, our trials were conducted on soils that tested very high in available P according to the Olsen test. These results indicate the Olsen test is likely not a good predictor of P availability under very acidic soils conditions, such as occurred in our trials. 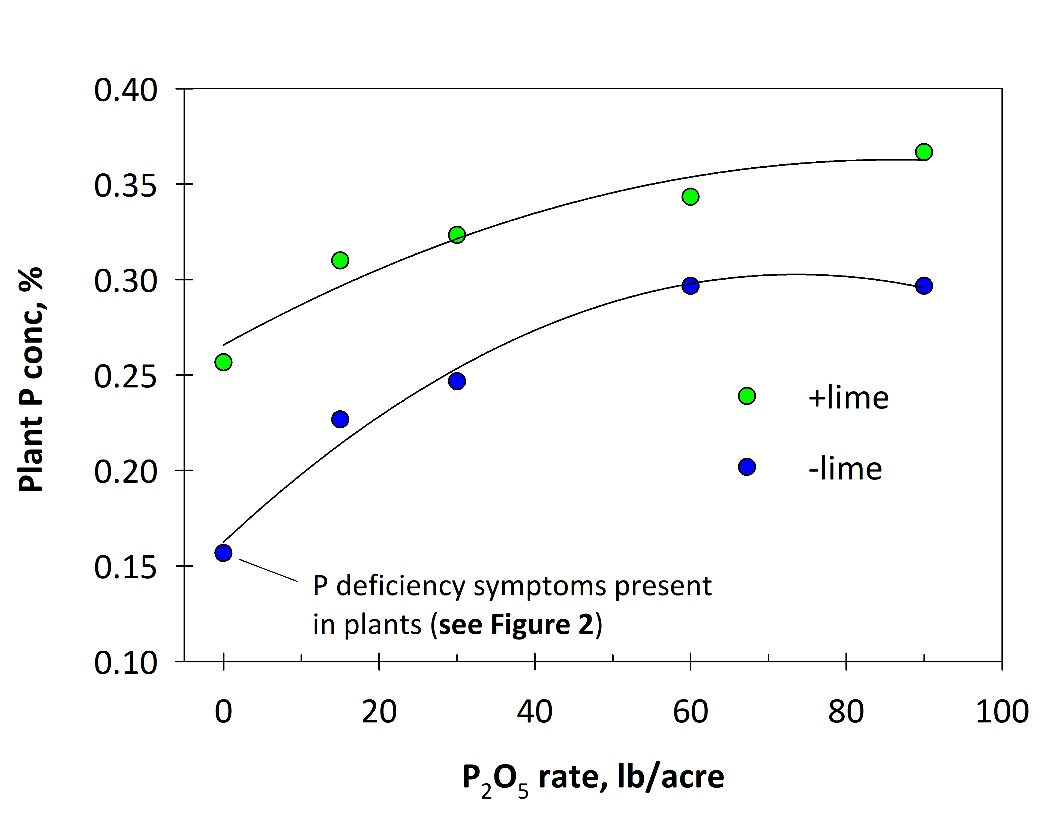 We found durum grain yield increased with P fertilization in 2018 and 2019, but only where soil pH was not increased with the addition of aglime (Figure 4). The interaction of lime and fertilizer-P was particularly impressive in 2018. In 2018, seed-placing 60 lb P2O5/ac ($23 cost @ $0.38 per lb of P2O5) increased grain yield by 22.2 bu/ac over the 0 P controls where lime was not applied. Conversely, yields did not increase with fertilizer-P when lime was applied to correct soil acidity. In 2019, we found a similar interaction between lime and fertilizer-P, but durum growth and grain yield was greatly reduced by two hailstorm events. The second hailstorm occurred during grain-fill and caused considerable numbers of shattered heads and broken tillers. Still, the results of our study indicate that seed-placed P fertilizer can mitigate Al toxicity and related P deficiency at field sites with very acidic soils (pH < 4.5 in top 4 inches). Most importantly, this response occurred even though the soils tested very high in available-P.

Figure 4. Durum grain yield on the Highwood Bench was improved with seed-placed fertilizer-P (0-45-0) under acid soil conditions (-lime) but was not affected where soil acidity was mitigated with lime applications. Olsen soil P level = 50 ppm in 2018 and 83 ppm in 2019 (very high).

Our results were consistent with previous reports from Oklahoma winter wheat trials. How fertilizer-P mitigates Al toxicity in crops is still a bit unclear. Two possible mechanisms suggest that i) fertilizer-P ties up dissolved Al in the soil so it can't be taken up by the plant; and ii) fertilizer-P uptake by crops results in Al-P minerals to form on root surfaces, in root cell walls or within root cells that decrease Al toxicity. Whatever the response mechanism, use of high rates of fertilizer-P should be viewed as a short-term approach to manage acidic soils. In Montana, this strategy might best be applicable where a farmer is renting land under a short-term lease agreement, is selling the land soon, or does not want to till after lime application, which is needed to raise pH in the root zone. Although all plots in this study were tilled, we expect the benefit of seed-placed fertilizer-P would be similar under no-till management.

We thank the Montana Agricultural Experiment Station, the Montana Fertilizer Advisory Committee, and USDA’s Western Sustainable Agriculture Research and Education program for supporting this study. We also thank collaborating producers for allowing us to conduct research on their farms.