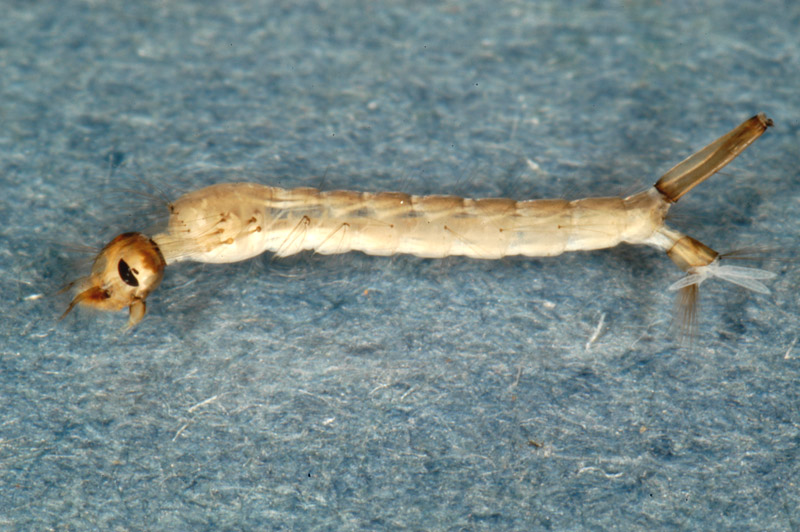 West Nile virus (WNV) has been a concern for people across the United States since the disease was initially observed in the summer of 1999. Since 1999, WNV has caused the largest arboviral encephalitis epidemic in US history. Vector control management programs have been intensively implemented to control mosquitoes that carry WNV. Our deterministic ecological risk assessment focused on 6 common mosquito adulticides used in vector control, including 3 pyrethroids (d-phenothrin, resmethrin, and permethrin), pyrethrins, and 2 organophosphates (malathion and naled). Piperonyl butoxide, a synergist for the pyrethroids, was also assessed. Both aquatic and terrestrial nontarget organisms were considered for acute and chronic exposures to the adulticides. Tier I exposure estimates were derived from ISCST3 and AERMOD for deposition and air concentrations affecting terrestrial organisms and PRZM-EXAMS for standard pond concentrations affecting aquatic organisms. Nontargets exposed to adulticides included small mammals, birds, as well as aquatic vertebrates and invertebrates in a pond subject to receiving the chemical via drift and runoff. Risk quotients were obtained by comparing exposures to toxic endpoints. All risk quotients were low indicating that risks to ecological receptors most likely were small.

Since West Nile virus (WNV) was introduced to New York City in 1999, it has subsequently spread through the Americas, creating human and animal health risks. Our equine risk assessment focused on three pyrethroid insecticides (phenothrin, resmethrin, and permethrin), pyrethrins, and two organophosphate insecticides (malathion and naled). Piperonyl butoxide, a synergist commonly used in pyrethroids, was also assessed. The objective was to use deterministic and probabilistic risk assessment methodologies to evaluate health risks to horses from vector management tactics used for control of adult mosquitoes. Our exposure estimates were derived from the Kenaga nomogram for food deposition, AgDRIFT® for deposition onto soil and hair, AERMOD for ambient air concentrations, and PRZM-EXAMS for water concentrations. We used the risk quotient (RQ) method for our assessment with the RQ level of concern (LOC) set at 1.0. RQs were determined by comparing the exposure to no-observable-effect-levels. Acute deterministic RQs ranged from 0.0004 for phenothrin to 0.2 for naled. Subchronic deterministic RQs ranged from 0.001 for phenothrin to 0.6 for naled. The probabilistic assessment revealed estimates of deterministic acute and subchronic RQs were highly conservative. Our assessment revealed that risks to horses from adult mosquito insecticides are low and not likely to exceed the LOC.

Qualitative risk assessment methodologies were used to assess the risk of establishment and consequent impacts on native minnows and species of concern (SOC) associated with the intentional or unintentional introduction of the mosquito biological control agent, Gambusia affinis, to various Montana watersheds.  Gambusia affinisintroductions for mosquito control have been made throughout the world; some introductions have resulted in deleterious effects on native species.  We used average January water temperatures, the presence of dams, and the presence of native minnows and SOC to define endpoints for our assessment.  Our results suggest that a section of the Missouri River running between Wolf Creek and Landusky had the highest overall risk score, which corresponds to the highest likelihood of establishment and effects on native minnows and SOC.  We also demonstrate how rivers with the highest temperatures are not necessarily at the highest risk of having deleterious effects on minnows and SOC; conversely, these rivers were found to be at highest risk of a population of G. affinisestablishing.

Mosquito management plans have been implemented in the U.S. and globally to manage mosquito vectors of West Nile Virus (WNV) and many other diseases.  However, there is public concern about ecological risks from using insecticides to manage mosquitoes. Two studies were conducted during the late summers of 2004 through 2006 at Benton Lake National Wildlife Refuge near Great Falls, Montana.  The first experiment was conducted in 2004 and 2005 to assess acute impacts of mosquito adulticides (permethrin and d-phenothrin) and larvicides (Bacillus thuringiensis israelensis and methoprene) on non-target aquatic and terrestrial arthropods after a single application.  The second experiment was conducted in 2005 and 2006 to assess longer term impacts of permethrin on non-target terrestrial arthropods after multiple repeated applications. For aquatic samples, in the first study, no overall treatment effects were observed despite a potentially deleterious effect on amphipods on sample date 1 in 2004.  During the same study, 1 of 54 responses had a significant overall treatment effect for sticky card samples.  Many of the responses for sticky card samples suggested significant time effects and time-by-treatment effects. Three response variables were associated with fewer individuals present in the insecticide treated plots in a multivariate analysis.  For the multiple spray study conducted in 2005 and 2006, 6 of the response variables collected via sticky cards exhibited significant overall treatment effects, but none was associated with fewer individuals in the insecticide treated plots.  None of the responses collected using sweep net sampling suggested overall treatment effects. Time and time-by-treatment effects were prevalent in 2005, but no discernable pattern was evident. In general, nearly all of the responses evaluated for either study indicated few, if any, deleterious effects from insecticide application.

CONCLUSION: Our results indicate that resmethrin+PBO was generally more toxic than δ-phenothrin+PBO. Based on our results, the house cricket seems to be a good surrogate species for estimating potential non-target terrestrial insect impacts from exposure to pyrethroids used in public health applications.

We derived laboratory LC50 values, assessed non-target insect risks, and conducted a field bioassay for ultra-low-volume (ULV) aerosol applications of insecticides used to manage adult mosquitoes. The house cricket, Acheta domesticus (L.), was used as an indicator species for medium- to large-bodied ground dwelling insects. The 24-h LC50 values for Permanone(A (R)) (formulated product of permethrin), Permanone + piperonyl butoxide (PBO), technical grade permethrin, and technical grade permethrin + PBO ranged from 0.052 to 0.9 mu g/cm(2). The 24 h LC50 for technical grade naled and Trumpet(A (R)) (formulated product of naled) were 0.038 and 0.44 mu g/cm(2), respectively. The synergist ratio was 2.65 for Permanone + PBO and 1.57 for technical grade permethrin + PBO. The toxicity of technical grade permethrin was about 10-fold greater than Permanone. A risk assessment using modeled estimated environmental concentrations resulted in risk quotients (RQ) that exceeded regulatory levels of concern, but when compared to field-derived actual environmental concentrations RQs did not exceed a regulatory level of concern, except in the case of technical grade naled. These results were expected because higher tiered risk assessments using field-verified data generally lead to lower risk estimates. Field bioassays using caged crickets showed no significant mortality for permethrin or naled after a single truck-mounted ULV application. The results of the risk assessment using actual environmental concentrations are supported by the field bioassays and suggest that a single ULV application of synergized or unsynergized permethrin and naled most likely will not result in population impacts on medium- to large-bodied insects.

The use of pyrethroid insecticides has increased substantially throughout the world over the past few decades as the use of organophosphorous, carbamate, and organochlorine insecticides is being phased out. Pyrethroids are the most common class of insecticides for ultralow-volume (ULV) aerosol applications used to manage high densities of adult mosquitoes. Pyrethroids are highly toxic to nontarget organisms such as certain aquatic organisms, and there have been concerns about the effect of applications of ULV insecticides on these organisms. To address the uncertainties associated with the risks of ULV applications and the contradictory findings of other ecological risk assessments, the authors performed a probabilistic aquatic ecological risk assessment for permethrin using actual environmental deposition on surfaces to estimate permethrin concentrations in water. The present study is the first ecological risk assessment for pyrethroids to quantitatively integrate the reduction in bioavailability resulting from the presence of dissolved organic matter. As part of the risk assessment, the authors incorporated a species sensitivity distribution to take into account the differences in toxicity for different species. The 95th percentile estimated concentration would result in less than 0.0001% of the potentially affected fraction of species reaching the lethal concentration that kills 50% of a population. The results of the present study are supported by the weight of evidence that pyrethroids applied by ground-based ULV equipment will not result in deleterious effects on aquatic organisms.

Maine Board of Pesticides Control  - http://www.state.me.us/agriculture/pesticides/wnv/results3.htm

Although we provide some general information on West Nile Virus (WNV), this web site is designed primarily to provide information on human-health and ecological risk assessments of WNV and tactics used for mosquito management.