A commonality of the largest ammonia losses was that urea applications were made to moist cold soil surfaces. Dissolution of the urea granules occurred at the soil surface and precipitation events that followed were less than 0.20” and scattered at least through the first 30 days. Volatilization from these large ammonia loss trials often lasted more than 42 days when average daily soil temperatures were 28 to 41 °F. Thus, applying urea to cold soils does not guarantee protection against large ammonia losses. Figure 1 shows the soil surface conditions as fertilization in these high loss trials. 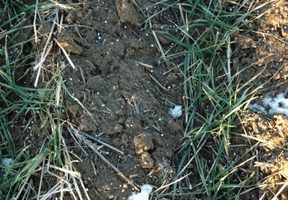 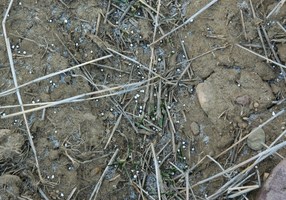 Trial 4 - March. Soil surface was frozen (19 °F) on the day of fertilization, and moist when it thawed 3 days later. 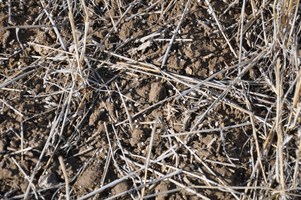 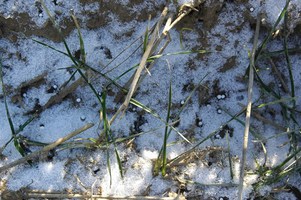 Trial 5 - March. A trace of snow was on the soil surface at fertilization. Fertilizer granules are beginning to dissolve.

Figure 1. Trials conducted with wet or damp soil surfaces at the time of fertilization produced high volatilization losses. Growers should avoid applying urea under these conditions unless the fertilizer has been treated with a urease inhibitor, or can be placed beneath the soil surface by at least 2 inches.

Urea broadcast onto modest snow packs (less than 6”; Trial 9 and 16) had cumulative losses of 24% and 21% of the application rate, respectively. The greatest volatilization occurred after the disappearance of the snowpack when the surface was drying, and soil temperatures were still cold. More details are presented in Fertilizer Facts No. 70 and 71.

When urea is applied to dry soil surface, losses are considerably lower (Figure 2, Trial 2) than when applied to wet or damp surfaces (Figure 2, Trial 5). During Trial 2, urea granules remained undissolved at the soil surface until 24 days post-fertilization when the site received nearly 1" of precipitation over a 3 day period. In Trial 5 the urea was applied to a light snow covered soil with 0.25" of rain on day 21 and another 0.8" over days 31-35 after fertilization. Essentially no other precipitation fell in these five weeks. 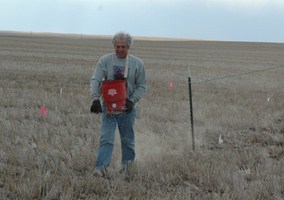 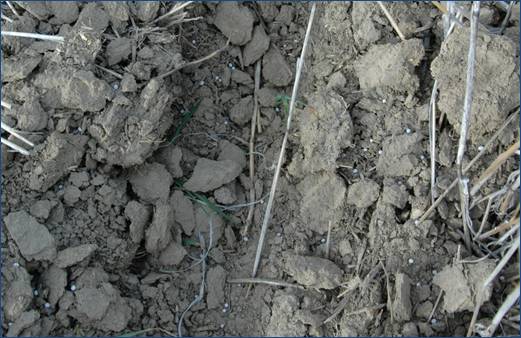 Trial 2 - Urea application to a dry soil surface during the fall of 2008. Note cloud of dust. Urea granules were still visible on the soil surface 1 week later because of dry soil conditions at the time of application and lack of precipitation. 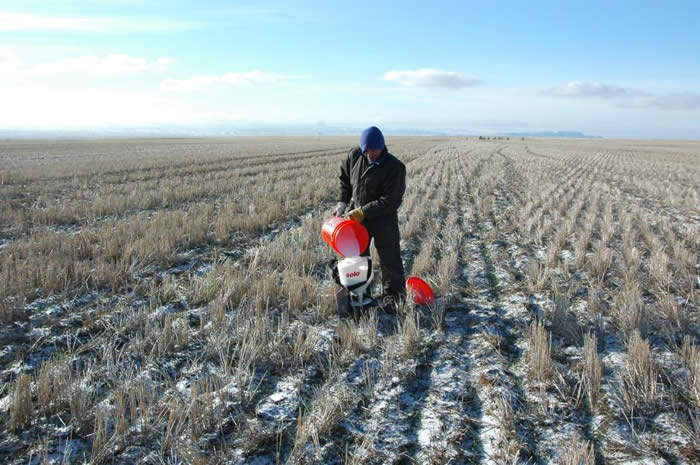 Figure 2. Contrasting ammonia losses (Trail 2 = 3% loss vs. Trial 5 = 40% loss) were observed at the identical field site in large part because of differences in soil moisture content at the time of fertilization.

The addition of the urease inhibitor Agrotain® to urea always reduced ammonia loss. Total loss from Agrotain® treated urea averaged 6% of the applied N rate, a 64% reduction in volatilization compared with untreated urea (Table 1). In summer 2012, the cost of treating urea with Agrotain® was $55 per ton of fertilizer, a 10% price premium to urea fertilizer, which is somewhat less than the potential savings of N lost to volatilization.

Agrotain® inhibits urea conversion to ammonium (NH4+) which provides more opportunity for precipitation to move urea deeper in the soil where ammonia is less susceptible to volatilization. The benefit of Agrotain® was typically limited to two weeks on acidic soils; however, the benefit of Agrotain® persisted longer at one site with calcareous soil suggesting that degradation of Agrotain® and/or its metabolites may have occurred more slowly at high pH. See Fertilizer Facts No. 60 and 71 for more details.

To minimize ammonia volatilization, broadcast urea should be incorporated within a couple of days by at least 0.5" of water in one event, or mechanically. Unfortunately, applying urea immediately in front of air-drills was not sufficient incorporation to reduce volatilization losses (Trials 13, 14, 15 and 17; data not shown).

Previous studies have observed large ammonia losses from urea applied to wet surface soil followed by several days of slow drying with little or no precipitation; and that ammonia losses are mitigated when 0.5 to 1.0" of rain or irrigation  move the N into the soil profile. Our results agree with these observations; however, we also found cold soil temperatures did not provide protection against large ammonia losses if the surface water content was high at the time of fertilization with little or no precipitation after application.

To minimize volatility losses growers should wait until the soil surface is sufficiently dry to prevent dissolution of the urea granules. If growers need to apply urea to soil surfaces with high water content, without subsequent incorporation, then addition of Agrotain® may be warranted to reduce volatilization losses by approximately 2/3 compared to untreated urea.

Spring urea applications had greater recovery of N fertilizer (average = 37.4%) than late-fall (26.3%) and winter (28.0%) applications. Spring recovery was likely highest becasue N applied in April was more closely synchronized with crop demand for N and large spring precipitation events infiltrate urea into the soil where it was protected from volatilization.

§ Means in a row with at least one of the same letter are not significantly different with 95% confidence.

* Yield with urea+Agrotain® is significantly different with 95% confidence.

Mitigation of Ammonia Loss from Urea Applied to Moist Soils by Agrotain®(Fertilizer Facts No. 60)

Nitrogen Recovery from Broadcast Urea is Affected by Application Timing and Agrotain® (Fertilizer eFacts No. 71)