Spring soil water content and temperatures need to be considered when calculating spring fertilizer rates. Many Montana regions east of the Continental Divide received several more inches of precipitation than average over the last 6 months (Figure 1) with a very cold February and early March, making fields cold and wet, with delayed planting. 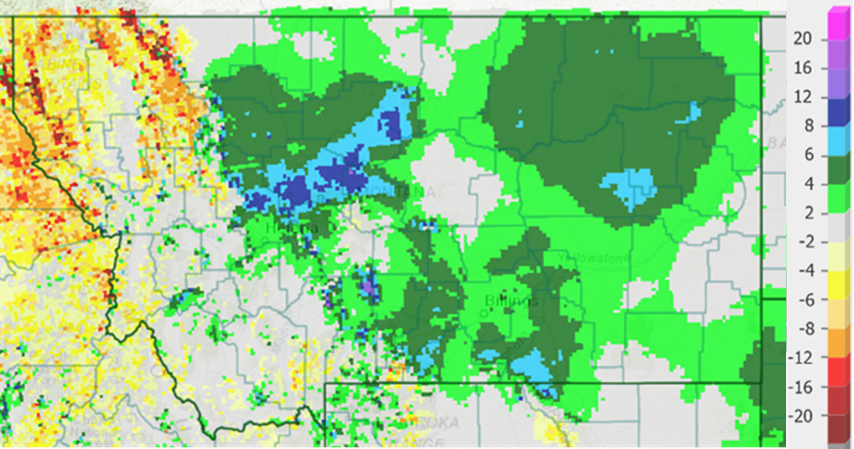 Figure 1. Departure from normal Montana precipitation from mid-September 2018, to mid-March 2019, in inches. Map generated by the National Weather Service.

Delayed seeding and cold soil may lower yield potentials, thus total nutrients needed, yet wetter than normal soils could increase yield potentials. Either way, providing small amounts of nitrogen, sulfur and chloride at seeding can give the plants a boost. Since these nutrients move easily with soil water, they can be either broadcast or applied with the seed. Broadcast application speeds up seeding and reduces the risk of seedling damage from high rates of seed-placed fertilizer. Side banding or double shooting is also an option to provide early fertilizer with low risk to germination.

Salt or ammonia injury to seedlings increases with warmer, drier, and coarser soils. Use the South Dakota State University/International Plant Institute Seed Damage Calculator for guidelines based on crop and seed bed conditions (http://seed-damage-calculator.herokuapp.com). For example, 7 pounds nitrogen per acre (units of nitrogen) as urea when seed-placed with canola in a fine textured moist soil with a 2-inch opener and 12-inch row spacing could cause 10% stand loss. With the same opening and row spacing, but in moist coarse soil, only 3 unit of nitrogen would cause same stand loss. Cereals are more tolerant.

To determine if nitrogen has been lost from a field, spring soil test for available nitrate in the top 6-inches and in the 6-inch to 2 foot depth (3 foot, if possible). If nitrogen leaches only a few inches, then young roots will soon reach the nitrogen if they are healthy. Nitrogen leached lower in the root zone is not necessarily a total loss. If the roots reach deep nitrogen sources near the time of flowering, the nitrogen boost can increase grain protein. However, in coarse or shallow soils, leached nitrogen may be beyond the depth of even mature roots.

Soil testing is not reliable to determine sulfur availability. Visual symptoms (upper yellow leaves) along with soil type and location in the landscape can help determine plant sulfur deficiency. Loam or more coarse-textured soils, especially on eroded ridgetops, are more susceptible to sulfur deficiency. If a comparison of fall and spring soil nitrate test indicates that nitrogen leached, then it is highly likely sulfate and chloride also leached. Target 30 pounds available chloride (soil plus fertilizer) per acre in the top 2 feet on small grains.

Patience may be the best approach if nutrients did not leach out of reach, or if poor uptake is temporary because of water-saturated soils. Nutrient deficient areas may not be large enough to warrant special treatment. However, watch for wide scale early symptoms of nutrient deficiency.  Yields could be lost by being too patient, and a rescue treatment could be worthwhile. Timely top-dress should help the crop green-up and encourage faster root growth to ‘catch up’ to nitrogen that has moved out of reach of shallow, young roots.

Nitrogen deficiency commonly shows as uniform yellow discoloration from the leaf tip backward, appearing in older leaves first. Even legumes may be nitrogen deficient if they are unable to fix their own nitrogen or take up sufficient nitrogen. Sulfur deficiency also causes uniform yellowing, but shows up on upper, younger leaves first. In contrast, yellowing due to disease or lack of other nutrients is usually non-uniform, striped or spotty. Chloride deficiency shows up as spots on certain varieties of wheat or when whole above ground plant chloride levels in wheat at the boot stage are less than 0.12 percent chloride.

A rescue treatment for nitrogen is 10 to 20 units of nitrogen applied as 28 or 32 percent urea ammonium nitrate solution (3 to 6 gallons per acre). Ammonium-based products contain nitrogen that is immediately available, unlike urea. Rescue treatment for sulfur is to apply 3 to 5 units of sulfur as granular ammonium sulfate (21-0-0-24) or as a liquid sulfur formulation. If it is hard to distinguish whether nitrogen or sulfur is lacking, ammonium sulfate application helps with both nutrients.

A rescue treatment for chloride deficiency is approximately 5 units of chloride as liquid or granular potassium chloride (potash; 0-0-60). This may accelerate kernel development.

With all foliar applications be aware of potential leaf burn. Streamer bars minimize burn especially if more than 25 units of nitrogen are applied. The risk of burn increases when herbicides, fungicides, surfactants, or sulfur are included in a mix with nitrogen. In these cases, don’t exceed 15 units of nitrogen if applied with a flat fan. Burn should not be an issue if nitrogen is put through a pivot, because the concentration of nitrogen in the irrigation water will be very low.

Broadcast applications are best followed by half-inch of irrigation or rainfall within a couple of days to minimize nitrogen loss as ammonia gas, and to force nitrogen into the root zone. This is also true for foliar applications because only a small portion is absorbed through the leaf. The rest needs to be washed off and into the soil to be taken up by roots.

Nutrient deficiency symptoms are shown at http://landresources.montana.edu/soilfertility/nutrientdeficiencies.html and described in Nutrient Management Module No. 9. If you have questions, contact Clain Jones, MSU Extension Soil Fertility Specialist, clainj@montana.edu, or 406-994-6076.